Public lighting: how much does it cost us…

Previous Next
Public lighting: how much does it cost us…

“In Italy, per capita electricity consumption for public lighting in 2017 was double that of the European average,” this is the starting point of the Study conducted by the Public Accounts Observatory and reported by the Catholic University.

“Total spending on public lighting is 1.7 billion euros, or 28.7 euros per capita compared to an average of 16.8 euros in the main European countries. Some efficiency measures could generate significant savings without creating inconvenience to the community, achieving an important containment of expenditure and a strong reduction in light pollution.”

Figures and consumption in Italy.

The report continues with a snapshot of the Italian scenario compared with that of Germany: “Electricity consumption for public lighting in Italy in 2017 was approximately 6,000 GWh, with a per capita consumption of 100 kWh, which is twice the European average of 51 kWh.(1)

Italian consumption has remained essentially stable over the past decade (in 2007, consumption was approximately 6,000 GWh), and Italian spending on public lighting in 2017 was €1.7 billion. (2)

In 2016, per capita spending in Italy was 28.7 euros, much higher than the average of the main European countries (16.8 euros), France (20.3 euros), the United Kingdom (14.2 euros) and Germany (5.8 euros). (3) A clear idea of the differences in consumption between Italy and the rest of Europe can also be had from the images of “The new world atlas of artificial night sky brightness” and NASA of 2016 (Fig.1), which show the night sky brightness of Europe.

Italy is one of the brightest countries on the continent. The excessive consumption for public lighting in our country is also highlighted by Figure 2, which shows the luminous fluxes per capita, at the provincial level (NUTS3), of Italy and Germany.

The difference between the two countries is remarkable: the average luminous flux per capita for Italy is almost three times that of Germany.”(4)

Fig. 2: Luminous flux per capita (comparison between Italy and Germany) 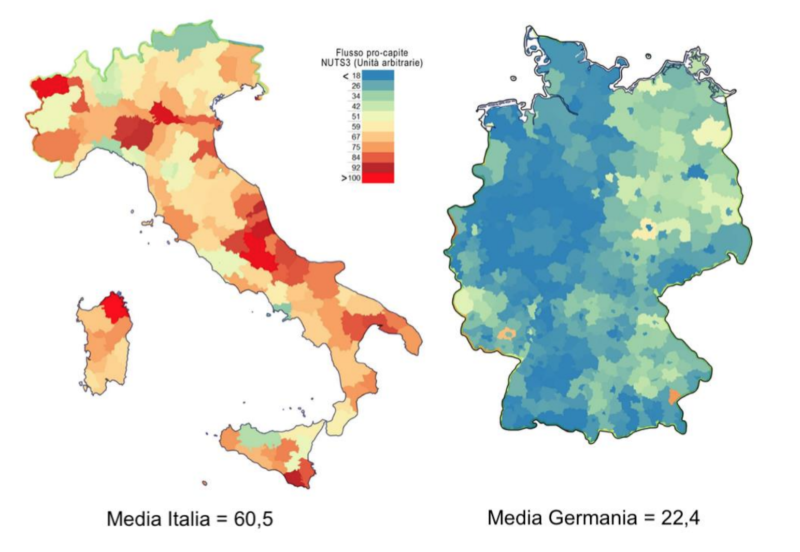 How much could be saved in the short and medium term

The potential savings estimated, adds the CPI Observatory, in the Proposals for a Review of Public Spending of March 2014 was about 300 million over three years. The measures envisaged were distinguished between short- and medium-term measures.

The former would have generated zero-cost savings primarily through the shutdown of:

Currently none of these measures has been adopted, perhaps due to the widespread belief in a relationship between brightness and safety.

In this regard it should be noted that:

– the possible areas of shutdown would not concern urban areas where people circulate;

– the belief that there is a positive relationship between safety and brightness is without scientific foundation: recent studies have shown that there is no statistical correlation between increased lighting and road safety, nor between the presence of public lighting and criminal events.

Medium-term measures, on the other hand, consist of replacing inefficient lighting systems and switching to LED lighting.10 In fact, the switch to LED is taking place in many municipalities, but has important critical issues related to the environmental criteria adopted (discussed in the next paragraph).

Other possible mid-term interventions not specified in 2014 include:

2. dimming of some installations;

3. full transition to LED for tunnels and traffic light lighting;

5. intensive use of motion sensors or adaptive lighting.

Through these measures, it is estimated that Italian per capita consumption could be reduced in the medium to long term by 50% (i.e. reaching the European average of 51 kWh), generating considerable savings.

This is demonstrated by the experience of Germany, which reduced per capita spending by 53 percent between 2007 and 2016. 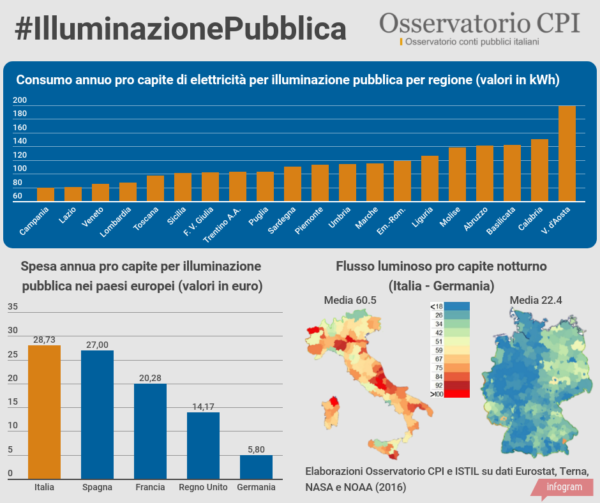 At the moment, therefore, there are no regulations that can effectively limit the high consumption of electricity for public lighting. Yet for the legislator it would be a good opportunity: the potential savings are considerable and a reduction in consumption would not only not cause any inconvenience to the community, but would also ensure a significant reduction in light pollution.

With the next funds allocated by Europe we should be in a position to define operational plans and investments focused on energy efficiency and lighting, it will not be “only Europe to ask us” but above all future generations.